It all started with a client’s request, and thank the gods for those, because it’s the one thing that always pushes me into trying new methods and incorporating new techniques.

I was given this super cute picture of Taco, a Griffon. And asked for a cute vector illustration, I was given some style examples and I started sweating cold, I had no idea how to get anything like that, but necessity is the mother of innovation, so I accepted the job. 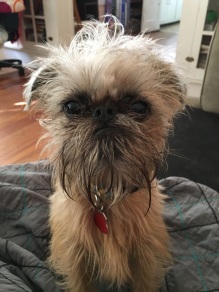 I started by doing the bit I knew how, which was drawing the little devil. For this I use Corel Painter (Photoshop fans, stop screaming at me, Painter has better brushes, you heard right. I said God Day Sir!) and a Wacom tablet. I cannot be arsed to check which model mine is, other than medium and wireless, but I used to work on an old small white Bamboo before and I have only a long list of compliments bordering on fan girling for Wacom in general.

I use the photo as a guide mostly for proportion’s sake, you can see below, I use a Cover Pencil, default Painter brush, 15 of size and 0 as minimum, because I like the style of stroke I can do with it, specially for long fur.

Once I have the line work done, and I have completed the bits of Taco that were not visible, is time to bring it into Adobe Illustrator. I’m with the Adobe hard cores on this one, Corel Draw has nothing on Illustrator, unless the later versions have become more powerful and stable than the latest I worked with, which I believe was XV. Illustrator is harder to master, I am mostly self taught, but I went to an Illustrator course, I just couldn’t figure it out alone, but once you do, the possibilities are endless.

So, I place the PSD file with the illustration, the reason for the PSD instead of just a JPG is that I will not re-trace the illustration in Ai with the pen (have you seen that fur? Who has the time?) I will cheat by using Image Trace. And this is why I have not added colour to this illustration before, it’s because Image Trace is a great tool for black and white, but if you try to use it with colour, no matter how careful you were, it’ll find areas with colours that you never knew existed.

I place it, Image Trace it and then Expand. Here, I check that I have a closed illustration, because I am going to need all the vector areas it created within the black line work. If this is not the case, I need to go back to the PSD file in Painter and close the gaps. When this is done and finished, I will get an exterior area, around the illustration, that I will later use to give it that thicker exterior line that looks so pretty. 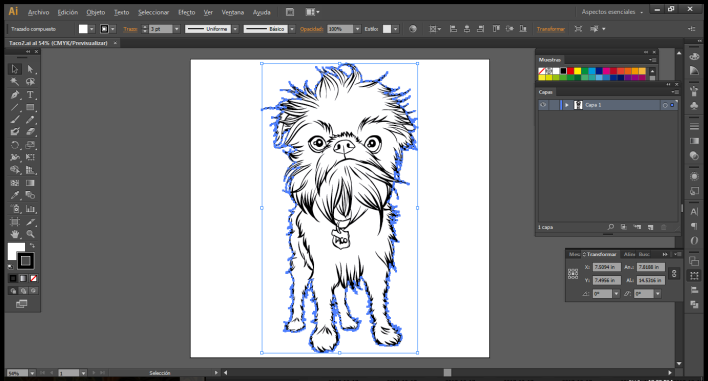 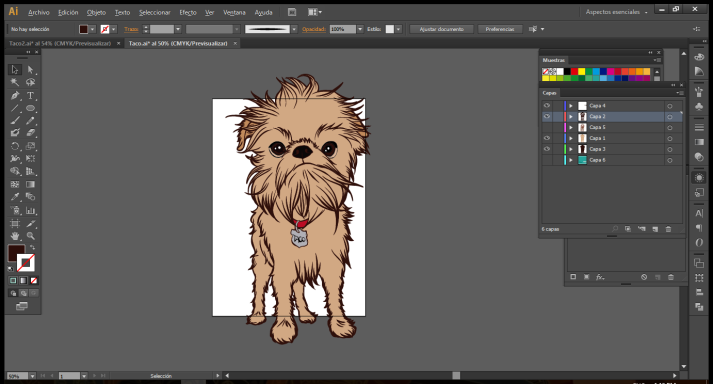 Before I get into how I do the fur, I want to show you how I separated the line work for the eyes, this is important because I am going to use a dark brown for all the other line work, but it would not do with the eyes which will look beter black, this sort of coloured line work can be see in Disney movies (except the 101 Dalmatians, since the used Xerox for that, but that’s another story, better told by Mari Ness)

I draw an clumsy area around the line work I want to separate and use Ctrl+C and then Ctrl+F to copy paste the area in the same place (Apple people, google it, sorry). Once I have the area, I do first an intersection between them, to get the eye line work I want and then I remove the area from the line work, this second step is not exactly necessary as long as you keep your layers straight, but I like to keep a tidy ship. 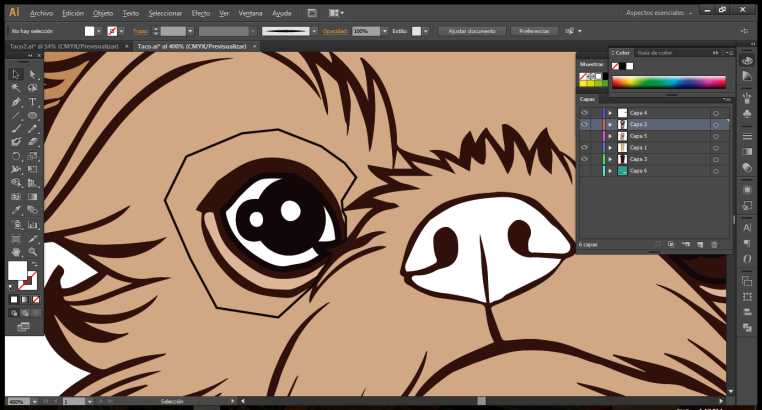 So now I have the black line work for the eyes like I wanted. Rinse and repeat with other eye. 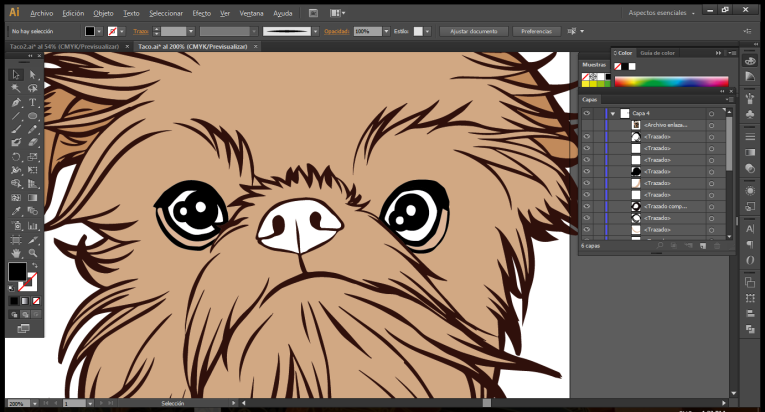 To do the fur I decided to add brush strokes, for two reasons, I can draw them to look as the strokes from the line work, since it’s my line work, and also because it will look messier than adding areas of darker or lighter colour.

To create the brush, I drew a circle, took the right and left anchor points and converted them to corners and separated them as far as I though I needed, then added the black stoke as an art brush. There’s plenty of tutorials on this, I have seen a couple, I will not go into much more detail. Once I have this, I start drawing strokes in a new layer, placed between the base colour and line work, this is because I believe in working efficiently as well as effectively, which means, I am going to hide any wandering crocked stroke below the line work, and never think about them again.

I draw a bunch of them, select them (here is where foresight with the layering will come in handy) and expand their appearance (yes, my Illustrator is in Spanish, I got it in Argentina). 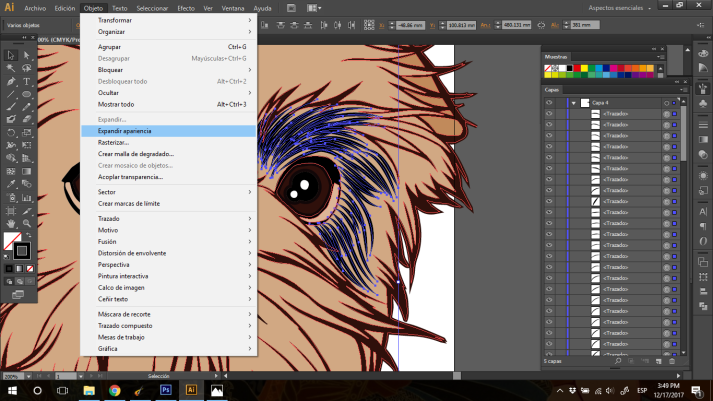 This is the tricky part, I manipulate the Appearance, mostly the opacity, of each stroke, not only the group as selected, I do this because I want the piling of strokes to give depth.

And then I keep adding them on top until I am happy with the fur. I group them once I have them in order to be able to easily select them and change opacity or colour. Specially colour. You can already appreciate a colour difference in this screenshots. Many times customer will reply “I love it, but…” and that is perfectly OK, I rather work with that in mind that find myself having to go back to square one because I did not prepare for possible revisions. Failure to prepare and all that… 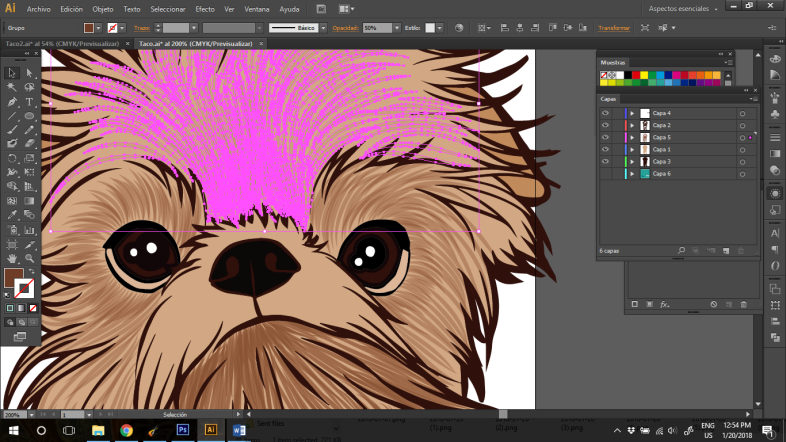 Cool. We have our Griffon fully furred.

For the background I used a simple rectangle and an area as shadow to give it a sense of depth. And that is basically it, if you have any questions, send them my way, if I can answer them I will, if not, we’re both in for a treat.

All rights reserved. No reproduction is allowed without my expressed consent.

2 thoughts on “How I learned to do fur with Vectors, a rather longer guide than I expected.”

mashara
Fiverr
Seller
My name is Sara, I'm an industrial designer and an illustrator. Some time ago I started drawing dogs for my friend's pets and here we are :) As an illustrator, I have done children books, fantasy book covers and internal black and white pages. Contact me for any questions you might have. Mashara
https://widgets.fiverr.com/api/v1/seller/mashara?widget_id=e32960cf-75fc-49e9-9ebd-7ff41197f48f